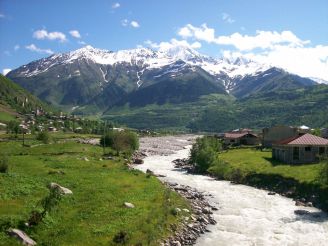 Upper Svaneti Mestia belongs to the municipality with the center in place. This mountainous region of Georgia, in which the height of the mountains falls in the west.

In the historical sense, Upper Svaneti is divided into freestyle and Princely or East and West. Once they tried to conquer the earth, and the princes Dadeshkeliani Dadian, but they were unable to carry out his plan through. None of them was able to go for the pass Tan, who became split Upper and Lower Svaneti.

By accident years Freestyle (East) remained archaic Svaneti to the present day. Here it is preserved the traditional life have not changed rites dominated building of stone in the form of temples and Svan towers. It is this part more than others interested tourists. Today in Svaneti include 147 settlements with the number of 14 thousand local residents. There is no clear administrative section, as the village together in some communities, and now there are 16. Often because of this confusion among tourists. In Upper Svaneti laid a lot of hiking trails, there are numerous excursions and willing enough to go into the mountains, although rises in them are quite complex, as does the climate.

How to get to Upper Svaneti

In Svaneti may be reached by bus from Tbilisi , Zugdidi and Kutaisi. All of them are sent to the central station. It is also possible to travel by car along the new road. It takes about 2-3 hours. There is a place for those who need to get faster. They are sent from Tbilisi to Mestia airport is the regional center. Lodging in Upper Svaneti, you can either in hotels or guest houses. The farther from the center, the price is lower.