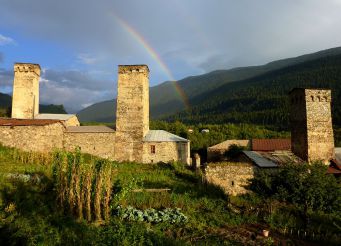 Svan towers are located in the mountainous regions of Georgia - namely, in Svaneti. Besides space present within the territory of almost all countries. It is best known Svan towers because of their large number. With them it is associated with many legends, stories and myths, although to this day it is not clear exactly their purpose.

Those towers that were left to our own times, were built back in the 8-13 centuries. Later, they were not constructed. The construction of almost all Svan towers identical. It consists of three floors with stone or wooden ceiling and strictly vertical walls. On top of the towers are located jagged strange-looking ornaments. Their purpose is also unknown.

There are many guesses to what is still to build these towers. The most common, that they served defensive functions. If you delve into the history, in that period no intrusion into Georgia did not happen. Yes, and by the form of the tower untenable on several factors: no loopholes, the design of windows is inconvenient for shooting or throwing objects of any kind.

There is also a version that they were building homes for cover during avalanches, but even here there are drawbacks: Not all towers stand on the side where the snow melts. It is sometimes said that in the earliest times the towers were fighting and then build them was a tradition and prestige. In them no one has ever lived, as there fireplaces and chimneys, and survive without them in severe winter is almost impossible. Local residents in their store potatoes and vegetables.

Previously, to get to the second floor of the tower, there were stairs and doors, now they are not. Some towers are privately owned, and some - in the state, but by and large they did not use. Some owners are planning to do there room for tourists and a café. In spite of this, wanting to look at the data structures are always a lot.