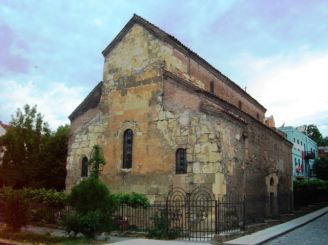 On the banks of the Kura River in the Old Town is a beautiful church Anchishati, built in the 6th century. The name of the church is associated with the most famous icon - the Image of the Savior, which was moved from the Cathedral Anchi South Georgia during the attack of the Ottoman Empire. Hiding place for the holy icon was the Church of the Nativity of the Virgin Mary, so that the old basilica was the second name - Anchishati, which translated means "Anchian icon." For a long time the icon of the Savior, framed in a silver frame with gold accents, kept in the Church of the Virgin Mary, but in the late 19th century, was deposited in the church museum. Today you can see the image of the Savior in the golden fund of the National Museum of Georgia .

Throughout its history, the church has undergone many changes Anchishati: after reconstruction due to destructive invasions of Turks and Persians. Under Soviet rule there was a museum, after it occupied the building art workshop. Only in 1958, began restoration work, after which he was returned to the original appearance of the church. Today Anchishati reopened for parishioners, where, like many centuries ago, conducted the service, as well as sound Georgian church hymns sung by the famous male choir "Anchishati."