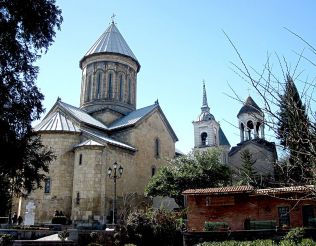 The ancient temple of Zion - the main attraction of Tbilisi , where still preserve the pristine Christian spirit. Named in honor of the mountain in Palestine, and consecrated the Cathedral of the Assumption of the Blessed Virgin. Under its arches are stored several Christian relics - Grapevine cross made ​​of vine and, according to legend, bound her own hair. According to legend, Nina brought Christianity to the Georgian land. There is also a shrine with a particle of the head of St. Thomas, one of the disciples of Jesus Christ.

For many centuries Sioni repeatedly subjected to destruction, but after each pogrom was restored and up to now has retained its medieval appearance.

The main temple of the city is never empty, here tend to get tourists and inhabitants of Georgia. The inner walls of the cathedral decorated with frescoes with scenes from the Bible, images of saints, beautiful iconostasis - all wrapped in an enchanting silence, calling to prayer. Simplicity and modesty Cathedral emphasize its holiness, he has miraculous powers. His door is always open and everyone can visit this holy place.

Near the temple there are two bell towers. The first is an old three-storied building of the 15th century, later destroyed by the Persians, and restored only in the last century. The second was built in 1812 and survived until our days.

Temple of Zion is in the old part of Tbilisi, on the waterfront of the Kura River and impresses with its understated beauty and grandeur.