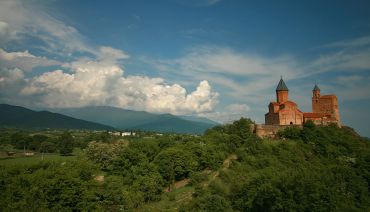 Grammy, the ancient capital of Kakheti kingdom, lasted not long, presumably from 16 to the early 17th century. But for the short period of time Grammy has become one of the most prosperous cities with lively trade. The founder of the city was the king of Kakheti Levan, here is his palace and built on his orders Temple of the Archangels Michael and Gabriel. In addition, there were many other buildings, such as shopping arcades, baths, churches, caravanserai. The city was surrounded by a fortified wall with loopholes and was located at the foot of the river on a small hill Intsoba. The city`s area is approximately 40 hectares with a population of over 100 thousand. Man. But the crushing blow of Shah Abbas turned prosperous city in ruins, after which the Grammy and could not be revived.

The once rich city is a few surviving structures, in particular the fortress wall, the Church of the Archangels Michael and Gabriel, bell tower, three-storey palace and a wine cellar. Special historical value is the Church of the Archangels with unique paintings, here is the tomb of King Levan. The remains of the underground passage leading to the river. On the ground floor of a renovated royal palace houses a museum with objects of everyday life at the time, is also interesting royal toilet. From the roof of the palace offers a beautiful view of the Alazani valley.