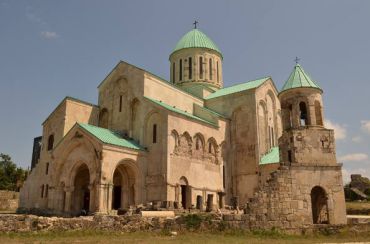 Bagrat Temple - Temple, built in Kutaisi reign of Bagrat III as the main cathedral of his kingdom, and consecrated in honor of the Assumption in 1003. Majestic in size and proportions of the temple became a fundamentally new word in the history of Transcaucasian architecture, was richly decorated with carvings and mosaics, and played a crucial role in the history of medieval Georgia. In particular, here was crowned David IV the Builder. During the attack the Turks in 1691 gunpowder explosion destroyed the roof and the dome, not subsequently reversed. In 1994 Bagrat temple was listed by UNESCO among the World Heritage in 2001 passed the Georgian Orthodox Church, which is periodically conducted in the ruins of worship.