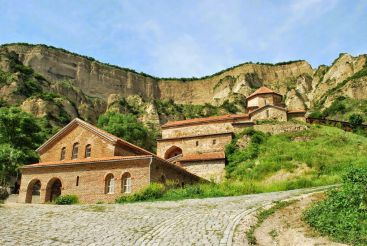 Shio-Mgvime monastery is located near the town of Mtskheta in Georgia. The complex of monastic buildings from the Middle Ages is today one of the most popular historical and architectural monuments of Georgia. Founded by the Rev. Shio, who was one of the thirteen Assyrian Holy Fathers who came to Georgia in the 6th century.

The monastery was built right into a narrow gorge on the north bank of the Kura River. The first building of the complex was the Church of St. John the Baptist, which is preserved to this day. According to historians, this church is one of the first domed churches of Georgia. Its bell tower was built in 1733. Another old building of the monastery - the refectory of the 12th century. It is connected with the cave Shio, which buried the founder of the monastery.

The upper church or Zemo Eklesiya, built around 1100, in the era of King David the Builder, and restored in 1678. Today it is the main monastery church. Separately from the other buildings on the hill stands a small chapel of the 12th century - Dzhvaris eklesiya, or the church of the Holy Cross. Its interior is decorated with preserved medieval frescoes.

Nowadays, Shio-Mgvimsky Monastery is valid. Located about 30 kilometers from Tbilisi. Public transportation is not provided. You can get there by taxi, which runs from the monastery Samtavro in Mtskheta.