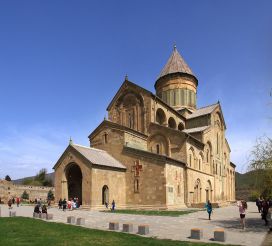 Samtavro monastery - a unique monument of the 11th century, which is located in the northern part of the town of Mtskheta at the confluence of the Kura and Aragvi. The history of the emergence of the monastery linked with the name of the revered saint, Equal to the Apostles Nina. According to legend, St. Nina settled in blackberry, erecting a tent, and there preached to the people of Christ, faith, heal the sick. Later on in this place, after her death, the king of Georgia Miriam built a church. Four years later, the temple was built Transfiguration of Our Lord, who later became the burial place for the king and his wife, Miriam, Queen Nana.

The temple was repeatedly destroyed, but he recovered - it expanded, finishing work, decorated with original ornaments. Samtavro many years was the center of the Christian religion, it was visited by kings and rulers of Georgia, are kept the most famous icons.

Before survived the great temple, the church of St. Nina, bell tower, part of the stone wall and tower of the fortress. Now here is the convent, one of the oldest in Georgia.

The temple Samtavro kept most revered shrines - the life-giving part of the pillars, the miraculous list of the Iberian Mother of God, the miraculous icon Nina Equal to the Apostles, of the stone from the tomb of St. Nina, and relics of saints.

At the monastery was buried holy man Gabriel, on whose grave comes a lot of pilgrims. There is constantly one of the sisters of the monastery gives to everyone from the burning oil on the grave of the lamps, and tells people about the wonders of Completion elder. In 1994 the monastery Samtavro was included in the UNESCO World Heritage List.