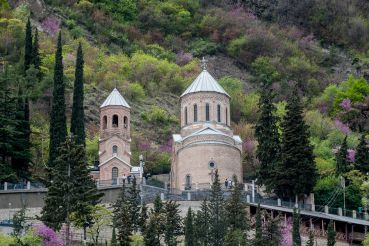 Mtatsminda Pantheon - a necropolis of outstanding people of Georgia, located around the church of Saint David on Mount Mtatsminda, or Mount Saint David.

In the 6th century, on the slopes of the Holy Mountain (translated as "Mtatsminda"), settled the monk David Gareji for approval of the Christian faith. Housing for themselves chose a small cave, and built a small prayer chapel. In the middle of the 19th century in its place was built the church Mamadaviti, which means Father David. Above the cave in which he lived St. David, built a church Iberian Icon of the Mother of God, and is located south of the Third Temple - Transfiguration, similar to the bell tower.

The first famous burial near the church of St. David`s funeral became [famous Russian writer Alexander Griboyedov in 1829 and his wife Princess Nino Chavchavadze in 1857. The official opening took place in the pantheon of 1929 and was dedicated to the 100th anniversary of the death of Griboyedov. Here lie the famous figures of the Georgian science and art, more than 40 graves.

On the territory of the pantheon is the source of St. David. There is a belief - if the stone soaked in water, attach to the wall and it will not disappear, the desire will come true.

Pantheon is often visited by tourists and inhabitants of the city to pay tribute to the great silence of the people who have done everything for the prosperity of their country.