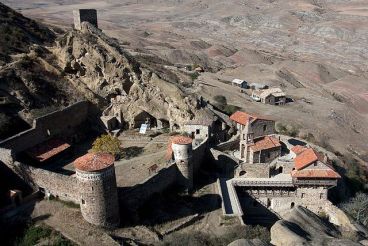 David Gareji monastery complex - the clearest evidence of the spiritual power of the Georgian people. For many centuries, monks settlement grew, built new cave monasteries and cells of hermits.

Founder of the monastery - a Syrian monk David, who came to Georgia to spread Christianity. Settled among the Gareji mountains, the Rev. David founded his monastery (early 6th century). Was later built the first monastery, called the Lavra of David. Despite the harsh conditions of life in the Gareji desert, the followers of St. David created new monasteries, settled in his life.

In total there are about 20 monastic caves, such as tetra-Udabno, Dodo-RCA Natlismtsebeli, Laura David, and others. Size of the complex are impressive, their length is 25 km. Located on the construction of Gareji ridge, the terrain itself quite deserted with sparse vegetation and small water supplies. In addition, the monastery complex is bisected by the border between Georgia and Azerbaijan.

The most revered monastery - Monastery of Saint David, here in the Church of the Transfiguration is the tomb of Saint David Gareji. One of the main asset of the complex - a unique wall paintings depicting scenes from the life of the Christian, icons and murals, as well as representations of prominent people glorified Georgia.

Repeated attacks of enemy troops left behind a strong destruction and looting of property monasteries. But it did not break the spirit of the monks, the monastery is being revived to life. Now part of the complex is an active monastery and in some cave entrance to outsiders limited. However, the complex David Gareji no shortage of pilgrims and tourists. Medieval complex with unique architecture can be called a miracle among Gareji desert. It is located 60 kilometers south-east of Tbilisi .