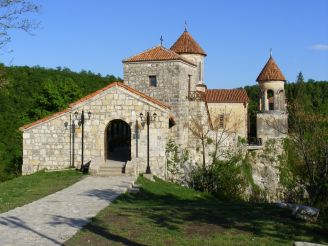 Motsameta Monastery - Monastery of Saints David and Constantine. It is very close to the Gelati Monastery, but separated from him and a small mountain canyon. Back in the early VIII century there was a church, but during the invasion of the Arab armies Murvana Ibn Muhammad Arabs burned it. In the middle of XI century was built a great temple and monastery named "Motsameta" (martyrs), at the same time and was drafted "Martyrdom of David and Constantine" reliquary Saints now located in the main temple on the hill to the right of the entrance. Pass under it made about half the height of a man. If you believe all the customs, you need to get around a few times around the ark, through this passage. The present building was again renovated in the XIX century, and Bagrat III rebuilt the church in the X century. Motsameta certainly is a monument of Georgian architecture.
Посмотреть отели рядом
Follow us on social networks