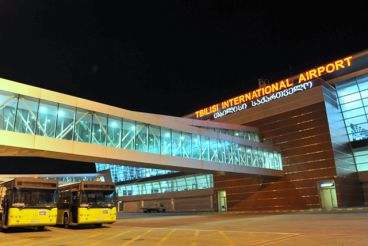 Turned out to be the most numerous tourists from Azerbaijan - more than 373 thousand. Man, followed by citizens of Turkey (365 thousand.), Hereinafter - the Armenians (325.5 thous.), The citizens of Russia - almost 182 thousand. Man. In addition, Georgia was visited by over 34 thousand. Tourists from Poland, Germany, the USA, Kazakhstan and Israel; almost 33 thousand. Ukrainians.

It should be noted, if the overall number of tourists decreased by about 7%, the number of transit travelers rose by 15.3%.

However, the recent Georgia travel is gaining momentum and is actively developing this industry. So, if we compare 2013 and 2014, the number of visitors to the country has increased by 2 per cent to more than 5.5 million people.

It is expected that one of the matches of the UEFA Super Cup , which will be held in Tbilisi in August this year, but will increase the interest of foreign tourists to Georgia.

Date: 13 May 2015
Great football will arrive in the Georgian capital
Date August 11, 2015 will be special for all Georgian fans and fans of football: in the capital of Georgia - Tbilisi - at the stadium "Dinamo Arena" will be a match ...
Feedback